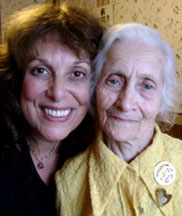 Several years ago, during a trip into the former Soviet Union, actress-director Zane Buzby discovered that there were thousands of elderly Holocaust survivors there in desperate need of help. “Many are the sole survivors of their families and villages,” she says. “Everything was destroyed by the mobile killing squads that fanned out across Eastern Europe during World War II. Some don’t have any pictures of their families and can’t even remember the faces of their parents.”

Today these incredible men and women are still suffering, living in abject poverty. Sick and isolated, they need money for food, medicines, home care, and other basic needs. Back in Hollywood, Buzby looked for an established philanthropy to help. But there were no organizations that could or would deliver financial aid directly to survivors in Eastern Europe. “For me, doing nothing was not an option,” says Buzby. “This should have been addressed years ago, decades ago. Someone had to get this show on the road.” She rallied the forces of family and friends, and then engaged the help of a small army of volunteers to establish The Survivor Mitzvah Project.

Hollywood is responding, bringing new attention to an old story that is still being told. Actors Chris Noth (The Good Wife, Sex in the City) and Milo Ventimiglia (Heroes), for example, read some of the letters Buzby has received from survivors at a recent fundraiser, imparting bits of history never before known, bringing many to tears, and raising much needed dollars. When someone writes: ‘Your letter for me was like a ray of sunshine in the darkness,’ or ‘The money you sent is for me life,’ you just have to keep helping,” says Buzby, who headed back overseas in December/January to deliver donations and medicines to scores of survivors.

The recent economic crash has turned their need into an emergency. The poverty is unimaginable. “Many of those we met for the first time are far worse off than I ever dreamed…alone and forgotten…living in small huts that are falling apart, literally. Yet, we were greeted with every kindness. They insisted we share their meager foodstuffs. The poorest of the people I visited in Ukraine always told me about someone poorer down the road, someone who needs help more. We felt like the cavalry in an old western and it was an honor to be the messenger of American goodwill. Still, we were only able to deliver aid to SOME and there are so many more who need but the simplest of things, things we take for granted.”

Despite the brutality they have endured, all that these Holocaust survivors want, remarkably, is to live. But nationalism has taken hold in these newly independent countries, like Lithuania, Belarus, Latvia, Moldova, and Ukraine, and anti-Semitism is on the rise again, manifesting in neo-Nazi movements and “erasings,” most often burning down or cementing over Jewish synagogues and cemeteries, bringing the lives of these incredible Holocaust survivors full circle.

“We are all on this Earth together and we need to take care of each other,” says Buzby. “In another 15 years, most survivors of the Holocaust will be gone. We need to do the right thing, now. The clock is ticking.” For survivors behind the old iron curtain, there are no reparations from Germany. And even for survivors living in the US and Israel who do receive reparations, the amount is so small that recipients are still destitute and in need. “I will never understand why the Claim Committee will not release emergency funds to these individuals in Eastern Europe who have suffered so much already. This is a source of great anguish and even greater disappointment for many. There are hundreds of millions of dollars sitting in this fund which is not getting to the people who really need it,” laments Buzby.

Even in the face of despair, there is a shining ray. “The Survivor Mitzvah Project is a wonderful initiative that provides badly needed funds to survivors in Eastern Europe in acute need of help…filling a need that was not being fulfilled effectively by any Jewish organization,” says Ephraim Zuroff, director of Simon Wisenthal Center in Jerusalem. Thanks to The Survivor Mitzvah Project, many survivors are doing well from the support of people they call “Angels from America.”

Donate $5 to The Survivor Mitzvah Project right now and become a small but priceless part of history.