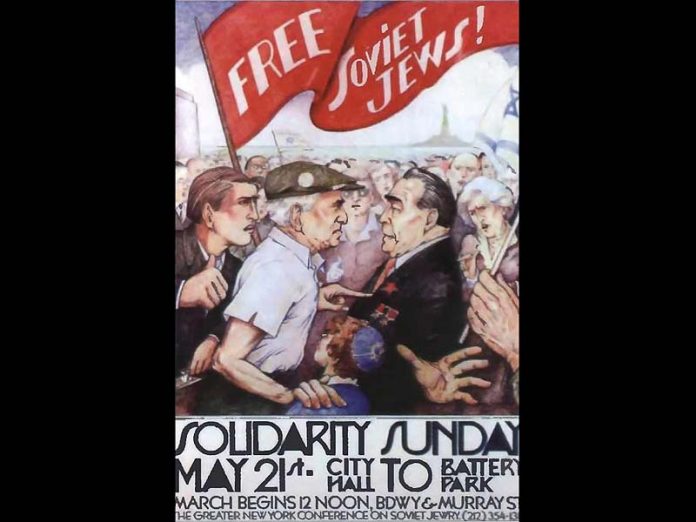 *Editor’s Note: This is the third installment in a new series of articles from Alex Grobman, PhD

The Arabs were not reliable partners with whom the Soviets could establish their foothold in the Middle East. Their connections tarnished them to fascism and the Nazis, ruled by effendis, monarchs and feudal cliques, and were tied to the British through treaties and alliances. The Soviets condemned the Arab attack on Israel in May 1948 as “reactionary…and as having been orchestrated by the British.” Once Israel was no longer perceived as a potential source of influence in the area, the Soviets adopted a neutral policy toward the Zionist state between 1948 and 1952.

After 1955, under the regime of Nikita Khrushchev—which needed access to oil and the Mediterranean for its growing fleet and industries—an aggressive anti-Israel policy was adopted as part of a pro-Arab approach. Khrushchev saw the developing and anti-imperialist Third World countries as natural allies and granted Egypt military aid. When Israel joined the Anglo-French Sinai campaign against Egypt in 1956, the Soviets sent the Israeli government an ominous note warning that the “very existence of the state” was in question. [1]

Major-General Moshe Dayan, then Chief of Staff of the Israel Defense Forces, noted that the implementation of the Joint Egypt-Syria-Jordan Military Command agreement convinced the Israelis war was imminent. In 1956, it was clear Egypt was preparing for “an all-out war” against Israel; acts of terror by groups of trained Arab guerillas “soared to the tens of thousands,” and were now being used by Egypt “as a means of warfare;” and Israeli shipping in the Gulf of Aqaba was blockaded—an act of war, according to the Geneva Convention. The massive arms deal concluded between Czechoslovakia and Egypt in September 1955 provided the Arabs with arms greater in numbers and quality than those possessed by Israel.[2]

From the Sinai Campaign until the Six-Day War in June 1967, Israel was portrayed in the Soviet press as a puppet of Western imperialists, prepared to initiate unprovoked aggression against its neighbors. In this hostile environment, the Soviets assumed the role of guardians of the “national liberation movements in the Third World.”[3]

After the resounding defeat in the Six-Day War—a war Israel waged on its own, without the assistance of the superpowers, while the Arabs relied on Soviet equipment and advisors—the Soviet ministry of communication consistently and constantly began using the term anti-Zionism in its propaganda. Until the 1970s the phrase was not found in dictionaries. The Soviets characterized Judaism as parasitical, seditious and a disgusting religion at the foundation of Jewish rationalism. In the early 1960s, antisemitism manifested itself in accusations of “economic crimes,” and Jews were convicted as economic criminals.[4]

Zionism became the euphemism for Jews, and Russian Jews were again used to attack Israel. The Soviets wanted to increase military activity in the Middle East and crush the Zionist nationalist stirrings of Soviet Jews, particularly among the young. General Alexander Tsirlin, a military scholar and the grandson of S. Ansky, author of The Dybbuk, aggressively criticized Israel by trying to equate Zionism with Nazi racism. Then 51 Ukrainian Jewish professors of medicine, members of the Ukrainian Academy of Science, composers, poets, engineers, actors, journalists and a Yiddish writer made that same declaration in Pravda on March 12, 1970.[5]

By writing letters of protest to Soviet leaders and newspapers, some Russian Jews responded to the defamation of Zionism, the proscriptions on emigration to Israel and the antisemitic discrimination in universities. The letters were never published, but a number of them were circulated through samizdat (smuggled reading material). Hundreds of letters were also smuggled to non-Communist countries, bringing Jewish national feelings out into the open. [6]

The vitriolic anti-Zionist campaign gave the Soviets a chance to rationalize the abysmal defeat of their Arab clients in the June 1967 war. Zionism was now number one in the lexicon of “Soviet demonology.” The Soviets wanted Israel separated from the civilized nations of the world by condemning its alleged aggression, its “genocide” of the Palestinian Arabs and attempting to force Israel to leave what they labeled the “occupied territories.”

Not even during 1952-1953, in Stalin’s assault against the Jewish intellectuals, was there such a barrage of hate propaganda against Jews. This anti-Jewish hatred was the subject of thousands of articles, broadcasts, films and lectures. In academic circles, Jewish religious doctrine was defined as advocating genocide and “the enslavement of non-Jews.” Judaism was the foundation for Zionist racism and belligerence in the Middle East. Zionism was a world menace and the Trojan horse for Western Imperialism in Africa and Asia.[7]

The Birth of the New Antisemitism

The antisemitic propaganda campaign conveniently forgot the former Soviet Union’s support for the establishment of the State of Israel and Stalin’s extensive relationship with Hitler before being attacked by the Nazis. It ignored Soviet involvement with Arab nationalists and fascist governments. Why did the Soviets replace Nazism and fascism with Zionism as the focus of their animosity? Why did they feed Nazi and Czarist antisemitic propaganda like the caricatures of those in Julius Streicher’s Der Stürmer and the fabricated Protocols of the Elders of Zion to the Arabs?

The campaign was most likely a product of the crisis within the communist system. By blaming Israel for impeding Soviet ambitions in the Middle East, they could deflect attention from the real problems affecting the regime. Because Jews were visible in dissident movements in Eastern Europe and Russia, anti-Zionism was a powerful tool to deter non-Jews from becoming involved in these “instruments of imperialism” or founding their own movements.

If Jewish nationalism was revived and emigration permitted, national separatism would again become an issue. The nationality policies for the Jews, the Armenians, the Georgians, Ukrainians, the peoples of the Baltic, the Volga Germans, the Crimean Tartars, and the Chechens all failed. An anti-Zionism campaign was supposed to stop the Jews and others from making their own demands.

The Jews in Russia were certainly the canaries in the coal mine. Intimidation and harassment, threats of imprisonment, exile, and antisemitism were designed to isolate the Jews from elements in Soviet society that might sympathize with them. Having the assimilated Jews join the anti-Zionist campaign gave the operation legitimacy and created an environment for conflict in the Jewish community.[8]

Foreign policy played a role in the anti-Zionist campaign too, but it was not the decisive factor. Hatred of Israel, according to this view, was due to the ever-changing Middle East landscape. In their quest to influence the Middle East, the Soviets encountered a strong Israel and a US proxy. Since Israel impeded Russian interests in the region, whatever enervated Israel hurts the US and the West. By identifying Israel as overly aggressive, expansionist, fascist, Nazi-like colonialists, and racist, the Soviets isolated the Jewish state in order to hasten its ultimate demise.[9]

The anti-Zionists made many of the same accusations against the Jews as did the Nazis. In using these methods they adopted previous methods of antisemitism: “the religious/spiritual and the socio/ethnical/cultural.” Each of these approaches has three distinct steps: creating specific negative character traits for the Jews, isolating them and then annihilating them. Racism dehumanizes the Jews in order to rationalize their removal before being exterminated. The process is then justified as a matter of “public health,” thus anti-Zionism has more to do with the advocates of antisemitism than it does Zionism.[10]

With a lengthy ideological history of anti-Zionism, it was not difficult for the Soviets to increase the intensity of their campaign in the Middle East to impress the Arabs. The hostility also helped enlist the support of the home front for a policy that would otherwise not be very appealing to those footing the bill.[11]

Israel was created in 1948 in one-sixth of the area allotted by the Balfour Declaration. The Allies had gained a vast area from the Turks during the war, and the British took one percent of the land the Great Powers acquired from the Turks to establish a Jewish Homeland. In appreciation for having liberated them from the “tyranny of a bestial conqueror,” and providing them with independent states, Lord Balfour hoped they would begrudge the Jews “that small notch in what are now Arab territories being given to the people who for all these hundreds of years have been separated from it.” The Arabs found this small accommodation to the Jews unacceptable.[12]

[8] Ibid. 294-295. The Zionists pressured the Soviets to let Jews immigrate to Israel. Their constant petitions and appeals were not reported in the Soviet press, but they did reach the outside world. From an ideological perspective, the Zionists demonstrated that the communists had not “solved” the Jewish problem via assimilation, as they claimed they did.