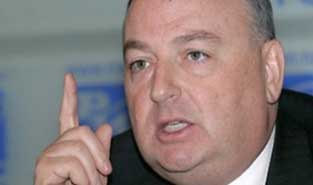 Sweden has become “a center of anti-Semitism,” the president of the European Jewish Congress, Dr. Moshe Kantor, told The Jerusalem Post Tuesday night, ahead of a ceremony at the European Parliament in Brussels to commemorate the Holocaust.

“Sweden, previously a calm country where there was no anti-Semitic problem just a few years ago, is a center of anti-Semitism,” Kantor said. He added that it was “unthinkable that in the 21st century Jews need to move from the city of Malmo to Stockholm and elsewhere.”

The Swedish government, he said, is the only government in the European Union refusing to talk about anti- Semitism in its borders with the European Jewish Congress – an umbrella organization of communities from across the continent.

Kantor said he had repeatedly contacted the office of Swedish Prime Minister Fredik Reinfeldt, but has received no reply.

“It’s a conspiracy of silence. They apparently think that if they say nothing, the problem will go away but we know it persists,” Kantor said.

Markus Friberg, press secretary of the Swedish prime minister, told the Post he could not provide Reinfeldt’s reaction in time for this edition, but noted that Sweden “invests four million Swedish crowns in increased security for the Jewish community. [Sweden’s] Jewish Central Council will have most of the money, 3.5m., at its disposal.”

Sweden’s integration minister, Erik Ullenhang, said: “Anti-Semitic expressions and other behavior based on racist beliefs are never acceptable in a democratic society.” The extra funding for security owed to the fact that “the Jewish congregations are today forced to take extra precautions to ensure that people dare to visit synagogues, Jewish meetings etc. in Sweden.”

Asked about new cross-European trends of modern anti-Semitism, Kantor said that research, which he initiated by Tel Aviv University’s watchdog on European anti-Semitism, shows numerous Iranian-funded NGO’s are “behind the publication and encouragement of anti-Semitism.”

Speaking before a crowd of 500 people at the European Parliament ahead of International Holocaust Day, January 27, Kantor referred to new sanctions that the Council of Europe approved against Iran as a “necessity.”

Earlier on Tuesday, Kantor referred to the decision to boycott Iranian oil as an “historical move.”

But he said this move must be followed by further sanctions – including a total embargo on Iranian exports – if it fails to deliver results. The decision to delay the application of the new sanction until May through June was “wrong,” Kantor said.

“Giving the Iranians a month to comply would have sufficed.”

Diaspora Affairs Minister Yuli Edelstein, who also spoke before the parliament, warned that “we will not live under threat, we will not beg for compassion and wait for another conference with abated breath.”

Kantor – who received the decoration of the French Legion of Honor on Tuesday – spoke at the event in Brussels after Martin Shultz, the newly appointed German-born president of the European Parliament.

Referring to the Wannsee Conference, in which, 70 years ago, Nazi leaders decided on the “final solution to the Jewish problem,” Schultz said: “This decision was made in the name of the German nation.

“As a representative of the German people, it is my responsibility to keep the memory and never forget what happened 70 years ago in our name.

The German nation’s duty is to take in account its responsibility for Jews today.”

The last and fourth speaker at the ceremony was Gabriel Bach, a former senior justice of the Supreme Court, who was the prosecutor at the trial of Adolf Eichmann 50 years ago. Eichmann, Bach said, never felt regret for the mass murder of Jews. Eichmann’s expressions of regret, he said were “mere lip service.”

Eichmann is reported to have said during his trial – after which he was executed – that the Holocaust was the “worst crime committed in history.”

In his address, Bach recalled testimony by a Dutch journalist who spoke to Eichmann after the war, who said Eichmann told him in the 1950s that his only regret was that “not being tougher on the Jews.” Eichmann reportedly added that the proof that “tougher” treatment was necessary “is the establishment of Israel, a Jewish state.”