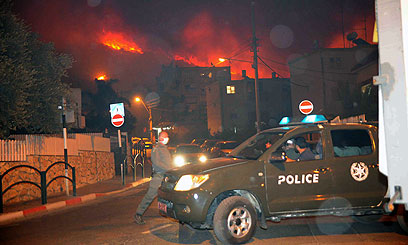 Mass evacuation on, Haifa under threat: More than 15,000 people were evacuated from their homes by late Thursday as a massive fire continued to rage in northern Israel.

Thursday night, officials in Haifa, Israel’s third largest city, ordered the evacuation of several streets in the Denia neighborhood. Mayor Yona Yahav estimated that some 2,500 people will be evacuated from their homes and sent to stay at shelters elsewhere in the city.

Earlier in the evening, some 5,000 residents in the town of Tirat Carmel were ordered to leave home and thousands of others were evacuated from various northern communities. Two prisons and a psychiatric hospital were also evacuated for fear the flames would reach them.

At least 40 Prison Service officer course cadets were killed in the fire earlier Thursday after their bus burned down en route to an evacuation mission in Damon Prison. Several other people were injured in the blaze, including Haifa Police Chief Ahuva Tomer, who was gravely hurt.

The Interior Ministry’s casualty information center has been reopened for the first time since the Second Lebanon War to collect all the information on blaze victims.

Speaking earlier in the evening, Israel’s firefighting chief, Shimon Romach said he was not optimistic about the prospects of containing the fire at this time. “I’m hoping that with our effort tonight and tomorrow we’d be able to contain the fire, yet the wind is making it difficult for us and it’s expected to grow stronger by early morning. Hence, I cannot paint an optimistic picture at this time,” he said.

‘It was a scary scene’

Albert Schatz is one of the locals forced to leave their home. He told Ynet that around 7:30 pm residents in his area were ordered to evacuate the area, and 15 minutes later he was already out the door.

“I packed a small bag, my wallet, ID, a few pictures and other important things. I quickly took my wife and kid to our relatives, living in the lower neighborhoods,” he said. “The fire was spreading massively. One moment we saw it at the edge of the mountain and the next moment it was already making its way downhill. We realized we had no choice but to leave.”

Schatz said he has no idea what happened to his house.

“We can’t go up there. It was a scary scene. I’ve lived here for 20 years and we’ve encountered a few fires before, but never a fire this size” he said. “It was amazing – within 30 minutes almost half the forest was in flames.”

Immigrant Absorption Ministry Director General Dimitry Apartsev, who arrived at Tirat Carmel, said: “This is an emergency and we’re here to help. The minister wanted to come here immediately, but we just calmed her down and told her there’s no need. We bought with us Russian and Amharic speakers to help the police and security forces communicate with residents who are new immigrants. I just spoke with the mayor and told him we’ll do anything we can to help.”

The evacuation of Damon Prison ended in tragedy, after 40 cadets in a Prison Service officers course were burned to death in a flaming bus sent to help in the prison’s evacuation. Apart from the 40 victims, several firemen and three police officers who drove a police car behind the bus were also injured.

Internal Security Minister Yitzhak Aharonovitch visited the site of the massive fire which broke out in the Carmel on Thursday, the largest in Israel’s history, and provided the media with details on the circumstances of the tragedy.

“With great care I say this to you: the passengers on the bus apparently strayed off the lane when it was clear and the fire caught up with them. Apparently the driver lost control of the bus and was hurt and burned.”

Aharonovitch sent his condolences to the victims’ families. “We are dealing with a mass-casualty event. There are some missing people who have yet to be located &ndash; two to three.”

Haifa firefighter teams made a desparate plea to all fire brigades in Israel to help contain the fire. “The war on the Carmel is the war on the State of Israel,” Reshef Levy from Haifa said. “The work will last days. These are crazy fire sites.”

The Haifa Municipality said that all Chanukah events scheduled for the weekend were canceled in light of the tragedy.

Hassan Shaalan and Raanan Ben-Zur contributed to this report