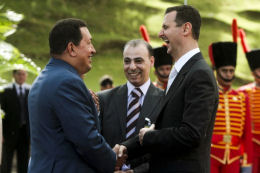 The presidents of Venezuela and Syria, Hugo Chávez and Bashar al-Assad, have accused Israel of terrorism. "Terrorism for us in the Middle East is one word which has a single synonym; that is Israel particularly," a joint statement said. Assad met with Chávez in Caracas to discuss economic cooperation and developments in the Middle East.

Both leaders said they were not interested in war in the Middle East, but when diplomacy failed "resistance is the alternative solution and our duty is to support it."

Chávez singled out Damascus for taking a leadership role in the region, saying Assad was to be commended for his ability to stand up to Western allies. "Imperialism is desperate," the Venezuelan president said. "It is now threatening the use of force as it has been doing for years." Chávez called Israel's government "genocidal" and also condemned the last round of UN sanctions against Iran. Assad said all nations, including Iran, had a "right to develop nuclear energy."

US Congressman Eliot Engel, a senior member of the House Foreign Affairs Committee, swiftly condemned Chávez' remarks: "Setting aside the falsehoods of his latest diatribe and the presence of the Syrian strongman, Bashar Assad, standing next to him, it's not difficult to understand why President Chavez would try to distract from his problems at home."

"If my country had the one of the highest murder rates in the world, the highest inflation rate in Latin America, and an economy which is expected to shrink by more than 6 percent this year, I, too, would be talking about anything but what's going on at home. I guess that's why Mr. Chávez is attacking the Israelis and why Foreign Policy Magazine just ranked him the 17th worst dictator in the world. And, I guess that's why he's hanging around Bashar Assad," Engel said in a statement.

After his visit to Venezuela, Assad met with Cuban leader Raul Castro and later traveled to Brazil, where he met with President Lula da Silva. Assad also plans a visit to Argentina. Both Cuba and Syria are on a list of nations the US considers state sponsors of terrorism.