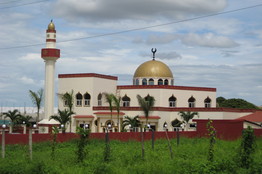 A New Mosque in Nicaragua Fires Up the Rumor Mill

With just 300 or so Muslims in all of Nicaragua, it became an instant mystery here when a big new mosque suddenly seemed to spring up recently in a residential neighborhood.

The ever-present Managua rumor mill quickly turned to the government of Iran. Its president, Mahmoud Ahmadinejad, a Muslim, and Nicaragua’s leftist leader, Daniel Ortega, a Catholic, say they share a revolutionary kinship. As part of a grandiose effort to show that Iran is a global superpower, Mr. Ahmadinejad and his government promised in 2007 and 2008 to invest up to $1 billion in this impoverished country of 5.7 million, including a new city and deep-water port in a remote jungle on the Atlantic Coast.

Never mind that local Nicaraguan officials say they haven’t heard a word on the port project ever since an Iranian-led delegation was confronted 18 months ago by angry villagers. Or that virtually none of the other announced investments have materialized.

The geopolitical chatter surrounding the gold-domed mosque, which opened in September after more than a year of construction, continues. “Did Iran put up the money? That’s the question everyone asks,” says Ismat Khatib, a native Nicaraguan lawyer and businessman who is of Palestinian descent. One Managua-based diplomat says it is believed Iran subsidized it.

But Mr. Khatib, who is treasurer of the Nicaraguan Islamic Cultural Association, which oversees the mosque, insists that the Iranian government contributed not a single córdoba. In fact, he says the only thing it actually promised to donate was a large, special rug for the mosque’s prayer room — and that it never arrived.

“This is the real version,” says Mr. Khatib. “You can end the mystery with this.”

Not quite. Speculation also surrounds who has been praying at the mosque, or la mezquita, which offers services five times a day, beginning at 4:30 a.m.

“All the Taliban,” declares William Martinez, a 24-year-old barber at Le Moustache, a hair salon across the street. Natalie Melendez, a clerk at the Veo Veo video-rental store on the corner, offers a different account. “There are two types of people who use the mosque,” she says, matter-of-factly. “The Arabs and the Iranians.”

Muslims, particularly Palestinians, have been emigrating to Nicaragua for decades and have established a number of businesses here, especially in the fabric trade. But because their numbers are so small, their faith remains foreign to most Nicaraguans, who are largely Catholic or evangelical Christian. Many here refer to all Muslims or Middle Easterners as Turks, and seem to know next to nothing about their religious beliefs.

“They pray to the god of the moon so they only gather at night,” says Ms. Melendez.

In an interview, Fahmi M. Hassan, a Palestinian fabric merchant and president of the Islamic cultural association, sought to dispel some of the myths surrounding the new mosque, which he says cost about $600,000.

Mr. Hassan — who says Nicaragua’s Muslims mostly are transplanted Palestinians, Jordanians and Pakistanis — scoffs at rumors that Iran paid for the mosque. He says the Iranian Embassy in Managua angered the Muslim community here when it tried about a year ago to compete with his Islamic association by creating a similar entity with a nearly identical name — the Nicaraguan Islamic Cultural Center.

“No one went,” he says, noting that Nicaragua’s Muslims are of the Sunni branch of the Islamic faith while most Iranians are of the smaller Shiite branch. Conflicts between the two main Islamic sects date back to the religion’s earliest days and a dispute over who should succeed the prophet Muhammad as Muslim leader.

Mr. Hassan says the Iranian center closed after a few months. But he still counts Iran’s ambassador to Nicaragua, Akbar Esmaeil Pour, as a friend. In fact, he says, the diplomat occasionally came to Managua’s old mosque — located in a small house a few blocks away from a busy strip of fabric stores — to pray. Mr. Pour declined to be interviewed.

So who did pay for the mosque?

Mr. Hassan says the primary funder was a Pakistani-born businessman who lives in Honduras. After seeing how tiny the old mosque was, the man offered to help finance a new prayer center on a piece of land purchased several years ago by local Muslims, Mr. Hassan says. “He paid around $350,000 and the rest was paid by the [Muslim] community in Nicaragua.”

Reached by telephone in Honduras, Mr. Amdani, who is chief executive of Grupo Karim’s, a textile-and-construction company based in Honduras and Mexico, said, “There’s no mystery about the mosque.”

He confirmed Mr. Hassan’s account, saying his company, which also financed the only mosque in Honduras, agreed to pay for the new Managua prayer center, although he scaled back the original plans. He also says he didn’t pay for an adjoining annex that includes a school and an apartment for the imam, and suggested the Iranian government may have helped fund that.

“I wouldn’t doubt if they gave some money to help them out,” he says. “I would say they must have.”

Mr. Khatib says his family paid for the annex.

On a recent visit to the mosque, a Wall Street Journal reporter was stopped by security guards at the front gate and, without explanation, was denied access to an afternoon ceremony. Just then, two local Nicaraguan businessmen drove up in a car and attempted to enter.

They publish a Managua tourist map and were hoping to discuss with Mr. Hassan including the new mosque in next year’s edition. Unfolding the map, Julio Gonzales noted that the current one has a cathedral, but no mosque and said that many tourists have been asking where the new one is.

“He’s very busy,” said a man inside the front gate. “He’ll have to call you back.” Turning to leave, Mr. Gonzales took another look at the mosque. “Good building,” he said in English.

Maybe so, but it turns out that this one shares something in common with many construction projects the world over — a dispute with the contractor.

José Ocon, who built the mosque for Mr. Amdani, says he’s owed $15,000 because of some last-minute changes to the dome he made at the local Muslim community’s request — increasing its height and adding a row of windows.

He says he called Mr. Hassan and said, “I need to get together to discuss the extras that you all requested.”

Mr. Hassan says he doesn’t know anything about the contractor’s claim. Mr. Khatib says it’s Mr. Amdani’s problem since he agreed to pay for the mosque. Mr. Amdani says he’ll look into the matter.

Meanwhile, Mr. Ocon recalled that at one point during construction, a local newspaper called him and asked if he was building a new Iranian Embassy. “I said, ‘No, I was making a mosque.'”