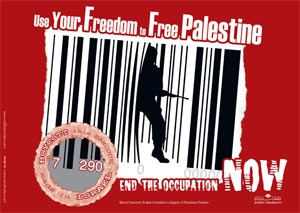 Insanity, they say, is doing the same thing and expecting a different result. Actually, that is just scientific irrationality. In human affairs, alas, insanity is doing the same thing and expecting the same result. A case in point is the Boycott, Divestment and Sanctions movement against Israel, which—considering what happened at the University of California, Berkeley, in late April, and off the Gaza coast in late May—will be coming soon to a campus near you.

If you missed it, Berkeley's student senate passed a BDS resolution against Israel, targeting General Electric and United Technologies, which presumably support Israel's occupation force. The student president vetoed the resolution. The senate then failed to override it, but the vote was thirteen to five in favor, with one abstention. The reports I've read of the debate suggest people falling into a familiar pattern: professors, students, union activists, etc. torturing logic to depict Israel's faults—which are serious enough to be unique—as "apartheid," while rehearsing the principles of action that arguably worked against South Africa a generation ago.

I say "arguably" because some of apartheid's most courageous critics, who helped to bring about an end to white rule, were opposed to B and D, even when they cautiously favored S. In 1987, when I was an editor of the Harvard Business Review, I interviewed Tony Bloom, CEO of the South African food processing giant Premier Group. Early on, Bloom rejected apartheid's foundations, and his company hired political detainees after they were released from prison. He had been among the small group of white business leaders who risked all in 1985 to meet with ANC leaders in Zambia—a great turning point. He befriended future South African President Thabo Mbeki and worked to support the transition to democracy. Though he eventually moved to London, he continued to transform his conglomerate into a model postapartheid firm.

What Bloom told me in 1987 was that, yes, foreign government sanctions on South African trade made sense in certain cases. But the boycott of South African universities and business people, and especially divestment campaigns against international companies doing business in the country, were seriously counterproductive. Why? Because those actions generally undermined the very people who advanced cosmopolitan values in the country. To get social change, you need social champions, in management as in universities.