As part of al-Qaeda's constantly expanding propaganda campaign, the organization’s messages are translated into various languages, including Spanish.

On September 8, 2008, Ibn Al-Athir Al-Ansari, a member of the Al-Hesbah [1] online forum since March 2007, posted a Spanish translation of a speech made by Salah Abu Muhammad to the Muslim public in the Maghreb on September 2, 2008. [2] Salah Abu Muhammad is responsible for propaganda for al-Qaeda in the Islamic Maghreb (AQIM).

Before the translation, Ibn Al-Athir Al-Ansari provided the following introduction, demonstrating the increasing spread of ideological Jihadi propaganda to a Spanish-speaking target audience:

In the name of Allah the merciful and the compassionate... I am pleased to present before you a translation of the words of the beloved brother Salah Abu Muhammad, in charge of propaganda at Al-Qaeda in the Islamic Maghreb, titled: Who are Those Murdering Innocents?
I ask the brothers to publish the translation on Spanish-speaking forums, so that the benefit will reach every believer, and the horror - every infidel. In addition, I address the experts in the Spanish language who inspect the translation and ask them to check my translation, in case of mistakes...
Prayer and peace on the seal of prophets, and praise to the Lord... Your brother, Abu Al-Qa’aqe Al-Shami”.

The speech itself is addressed to Muslims in the Maghreb, aimed at convincing them that al-Qaeda is not acting against innocent Muslims, contrary to claims made by the Algerian government and western media. The speech has an apologetic tone and attempts to prove that all al-Qaeda attacks are meticulously planned and aimed only against government and military targets, as well as against the Americans and the French, who provide aid to the Algerian government. Related to this point, the speech also mentions Canadians and Russians as active entities in Algiers and therefore as legitimate targets for attack.

Upon reviewing the Spanish text of the speech, several insights can be drawn:

Posted messages and the Spanish translation from the Al-Hesbah website: 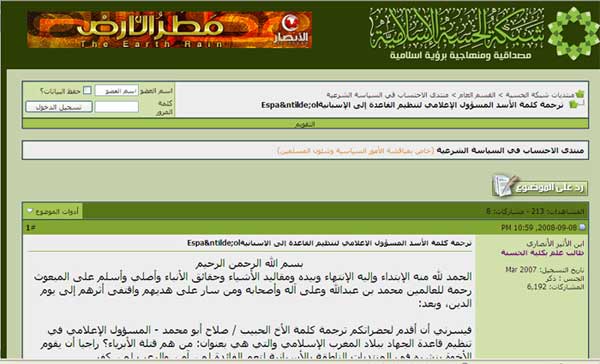 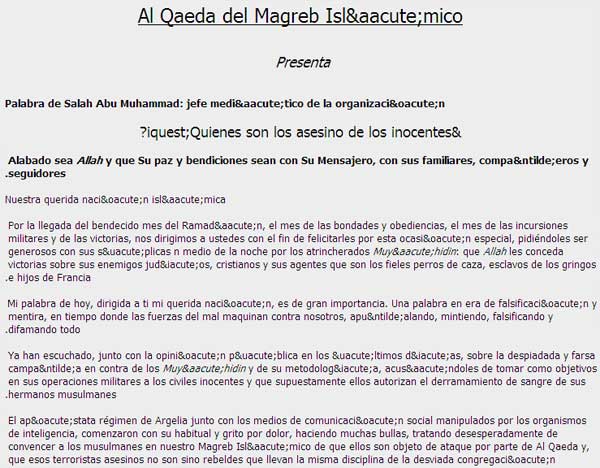 [1] Al-Hesbah is a leading Islamist websites that serves as a conduit for messages from al-Qaeda and other Jihad organizations.