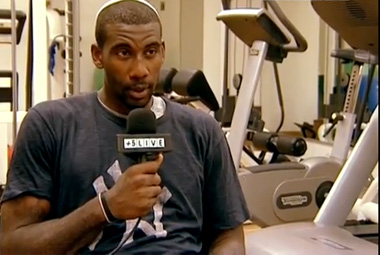 Amar’e Stoudemire, the sporting world’s most famous maybe-Jew, departed Israel yesterday after a week-long trip. The New York Knicks power forward’s Twitter feed lets us piece together his itinerary: Arrival in Jerusalem, where he hung out with “family and friends”; the necessary Dead Sea excursion, where he was “rejuvenated”; then up to Tel Aviv (“This city reminds me of Miami”—very perceptive, Amar’e, although Miami actually has more Jews ); time for a work-out ; and, finally, homeward-bound.

In the meantime, we learned that he may not, technically, be Jewish after all. “His mother says there’s some Jewish blood on her side, but Amar’e is just a total student of history and had been planning a trip to Israel for awhile,” his (Jewish) agent explained. “Is it possible [that he’s Jewish]? Maybe. We’re going to do some research.” Um, okay.

And then there was the interview he gave in Israel (after the jump): Amar’e Stoudemire pledging to fast on Yom Kippur, abstain from bread during Pesach, and even celebrate Shabbat (he does say that his basketball schedule may require breaches of these rituals—Tamir Goodman he ain’t). Does he come off as a bit over-earnest and out of his league? You bet. Does he seem like a fool? Absolutely not. Does one sense a Knicks-inspired publicity ploy? The cynic in me wants to, but honestly I don’t think the evidence is there. (And apparently, the Knicks are weirded out by the whole thing.) Is he, ultimately, likeable? Incredibly, and I would bet anything he is more likeable to Gentiles now, too. This is honestly one of the more quietly fascinating sports stories in some time.

Really, I don’t know exactly what to say about the whole thing except that you should read Bethlehem Shoals’s take (Shoals is the pen name of one Nathaniel Friedman, and his own background is an integral part to his essay); that keeping Amar’e Stoudemire in the Tribe is just one more reason to oppose the ultra-religious zealots currently attempting to seize control of Israeli Judaism; and that, um, well, you should really watch the interview after the jump, in which Stoudemire shows off the Star of David tattoo on his left hand and in which he has the definitive statement on LeBron James’s ditching the Cleveland Cavaliers: “There maybe could’ve been ways he could have made it a little more kosher.” OMG.