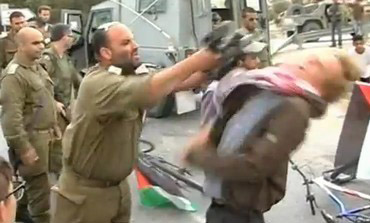 On Saturday, 250 Israeli and Palestinian peace activists got together for a bike ride in the Jordan Valley. Somewhere between Jericho and the village of Jiptlik, they were stopped by IDF soldiers. What happened next was caught on tape. You can watch at the end of this article. If you’re not one for violence, the takeaway is simple and bloody: After yelling at the activists to move, the regional commander, Lt. Col. Shalom Eisner, lifts his weapon and slams it into the face of a young man standing peacefully nearby. The man falls to the ground.

Although thankfully there were no deaths, this should be Israel’s Trayvon Martin moment. Like the recent case in Florida, this brutal attack is larger than the sum of its parts. The Martin case was about race in America; the Eisner case is about religion in Israel.

Eisner, who has been suspended, is the son of the late Rabbi Benny Eisner, a close disciple (and the former chauffeur) of Rabbi Tzvi Yehuda Kook, the spiritual father of the settler movement. Eisner is part of a cadre of younger religious officers climbing their way into the IDF leadership. As Amos Harel has reported, in 1990, only 2 percent of the cadets enrolled in officers’ course for the infantry corps were religious. By 2007, that number had skyrocketed past the 30 percent mark. “In some of the infantry brigades,” Harel wrote, “the number of religious company commanders has passed the 50 percent mark—more than three times the percentage of the national religious community in the overall population.”

Many of these soldiers, it’s reasonable to assume, are motivated by patriotism and see as their supreme goal the defense of Israel and its people. But others see their mission as divinely tinged. We know this because they were the ones who eagerly read the pamphlets distributed by official army chaplains during the 2009 war in Gaza calling the military operation a holy war; who recently left an official ceremony to avoid listening to female soldiers sing, violating direct orders; who cheered when Avichai Rontzki, the IDF’s former chief rabbi, argued that women shouldn’t be allowed to serve in the IDF.

Just as the shooting in Florida facilitated a discussion about bigotry and legislation, so should the attack in the Jordan Valley. Eisner must be more than suspended; he must be fired immediately. And that’s not enough. The army, Israeli society, and all who care about both should carefully consider the consequences of an increasingly ideologically driven senior command tasked with goals that, increasingly, pertain to the very ideology they espouse. In 2005, most IDF soldiers followed orders and participated in the withdrawal from Gaza. When the next order for large-scale evacuation is given—when it’s time to end the occupation and abandon Migron, Beit El, and the other monuments to religious zeal and folly—we may not be so lucky.