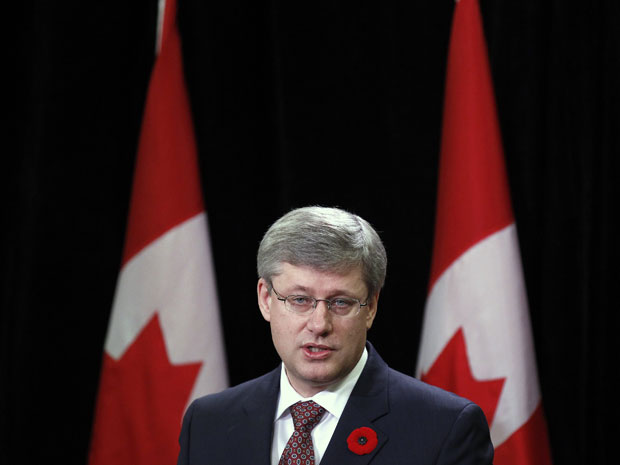 [ Editor’s Note: The following is an excerpt from Prime Minister Stephen Harper’s speech on Parliament Hill Monday to a gathering of international parliamentarians and experts attending a conference on combating anti-Semitism.

It is significant to note that Canada lost its bid for the UN Security Council seat in mid-October. The result meant that Mr. Harper’s government was the first to have failed to maintain Canada’s record of winning a place on the 15-member body – the UN’s most powerful – once per decade since the United Nations’ inception in 1945.

Two weeks ago I visited Ukraine for the first time. At the killing grounds of Babyn Yar, I knew I was standing in a place where evil – evil at its most cruel, obscene, and grotesque – had been unleashed. But while evil of this magnitude may be unfathomable, it is nonetheless a fact.

It is a fact of history. And it is a fact of our nature – that humans can choose to be inhuman. This is the paradox of freedom. That awesome power, that grave responsibility – to choose between good and evil.

Let us not forget that even in the darkest hours of the Holocaust, men were free to choose good. And some did. That is the eternal witness of the Righteous Among the Nations.

And let us not forget that even now, there are those who would choose evil, and would launch another Holocaust, if left unchecked. That is the challenge before us today.

In response to this resurgence of moral ambivalence on these issues, we must speak clearly.

Jews today in many parts of the world and many different settings are increasingly subjected to vandalism, threats, slurs, and just plain, old-fashioned lies.

Let me draw your attention to some particularly disturbing trends.

Anti-Semitism has gained a place at our universities, where at times it is not the mob who are removed, but the Jewish students under attack. And, under the shadow of a hateful ideology with global ambitions, one which targets the Jewish homeland as a scapegoat, Jews are savagely attacked around the world – such as, most appallingly, in Mumbai in 2008.

We have seen all this before. And we have no excuse to be complacent. In fact we have a duty to take action. And for all of us, that starts at home.

In Canada, we have taken a number of steps to assess and combat anti-Semitism in our own country. But of course we must also combat anti-Semitism beyond our borders, – an evolving, global phenomenon. And we must recognize, that while its substance is as crude as ever, its method is now more sophisticated.

Harnessing disparate anti-Semitic, anti-American and anti-Western ideologies, it targets the Jewish people by targeting the Jewish homeland, Israel, as the source of injustice and conflict in the world, and uses, perversely, the language of human rights to do so.

We must be relentless in exposing this new anti-Semitism for what it is. Of course, like any country, Israel may be subjected to fair criticism. And like any free country, Israel subjects itself to such criticism – healthy, necessary, democratic debate. But when Israel, the only country in the world whose very existence is under attack – is consistently and conspicuously singled out for condemnation, I believe we are morally obligated to take a stand. Demonization, double standards, delegitimization, the 3 D’s, it is a responsibility, to stand up to them.

And I know, by the way, because I have the bruises to show for it, that whether it is at the United Nations, or any other international forum, the easy thing to do is simply to just get along and go along with this anti-Israeli rhetoric, to pretend it is just being even-handed, and to excuse oneself with the label of “honest broker.” There are, after all, a lot more votes, a lot more, in being anti-Israeli than in taking a stand. But, as long as I am Prime Minister, whether it is at the UN or the Francophonie or anywhere else, Canada will take that stand, whatever the cost. Not just because it is the right thing to do, but because history shows us, and the ideology of the anti-Israeli mob tells us all too well, that those who threaten the existence of the Jewish people are, in the longer term, a threat to all of us.

Earlier I noted the paradox of freedom. It is freedom that makes us human. Whether it leads to heroism or depravity depends on how we use it.

We are free citizens, but also the elected representatives of free peoples. We have a solemn duty to defend the vulnerable, to challenge the aggressor, to protect and promote human dignity, at home and abroad. None of us knows whether we would choose to do good, in the extreme circumstances of the Righteous. But we do know there are those today who would choose to do evil, if they are so permitted. Thus, we must use our freedom now, and them and their anti-Semitism at every turn.

As I said on the 60th anniversary of its founding, the State of Israel appeared as a light, in a world emerging from deep darkness. Against all odds, that light has not been extinguished. It burns bright, upheld by the universal principles of all civilized nations – freedom, democracy, justice.

By working together more closely in the family of civilized nations, we affirm and strengthen those principles. And we declare our faith in humanity’s future, in the power of good over evil. While the vote in the 192-member UN General Assembly is secret, broad opposition from members of the Islamic block appeared to have scuttled Canada’s chances of returning to the council for the 2011-2012 two-year term. The Harper government’s shift toward support for Israel…had not gone down well with members of the 57-member Organization of Islamic Conference, said officials based at the UN.