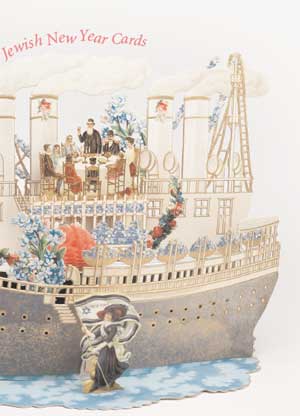 A century ago, the advent of the Jewish New Year prompted a flurry of activity in Jewish communities across the United States. Some American Jews, manifesting a sudden “shiver of religiosity,” purchased tickets to religious services; others marked the occasion with a new hat and still others – lots of them, it seems – exchanged greeting cards. A new minhag or custom, the distribution of shana tovas, as Jewish New Year cards were commonly called, took American Jewry by storm at the turn of the twentieth century when neighbors vied with one another in sending out the most cards or the very latest ones.

Given the novelty of the practice, the exchange of Jewish greeting cards also entangled American Jews in a thicket of do’s and don’ts.”New Year presents the same difficulty as the issue of wedding invitations,” observed the American Hebrew, one of the nation’s leading Jewish newspapers, in 1905. “We have to debate where we can safely draw the line, with whom we are so intimate that we need not send cards, with whom we are sufficiently distant that we can forget to mail a greeting and who is so punctilious that the non-receipt of [a card] will make him or her our sworn enemy for life.”

Widely available and affordable, shana tovas could be bought at any number of venues, from pushcart vendors and “Ghetto stationers” to fancy department stores such as Wanamaker’s, which carried the item on its main floor. In 1913, for instance, “novelty cards” could be had for anywhere from six to eighteen cents apiece, postcards for a penny, while personal greeting cards “with your own name and address” ranged from twenty to forty cents.

Eager consumers could also purchase the cards directly from the Hebrew Publishing Company and its competitors, Bloch Publishing Company and the Williamsburg Art Company. All three companies functioned as both manufacturers and distributors. Much like their recipients, Jewish greeting cards came in various kinds of shapes, sizes, and sensibilities, from the modest, self-contained square of a penny postcard to an oversized, eight-by-eleven-inch rectangle, accented with all manner of furbelows and frills. Some cards were the very picture of restraint: quick and to the point, they eschewed ornamentation in favor of a simple message in Hebrew and English: “L’shana tova tikasavu.A happy New Year.” Others trafficked in the sweet and sappy. (“If we may not be sentimental on Rosh Hashanah when, indeed, shall we?”wondered one well-wisher on the eve of World War I.) Featuring amber-hued scenes of a multi-generational family sitting down to a yontefdike dinner or performing the ritual of tashlikh, they offered a vision of Jewish life untainted by time. Still other shana tovas, “multi-colored pasteboard creations, frosted and be-ibboned,” reveled in detail, in riotous combinations of motifs, colors, and materials such as accordion pleats and paper hinges which allowed the images to pop up and open out in all their three-dimensional glory.Visually arresting and compelling, these cards were meant to be displayed proudly on a mantelpiece,where they could be seen by one and all, instead of pasted onto the leaves of an album or casually discarded. 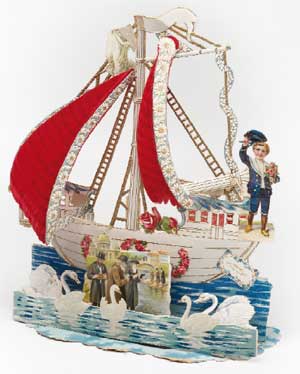 With the exception of the actual greeting stamped on the cover or within its folds, little distinguished Jewish greeting cards from their non-Jewish counterparts, most of which were published in Germany, the premier source for color printing. Vivid examples of chromolithography, the democratic art” of the late nineteenth and early twentieth centuries, they not only shared a penchant for sweetfaced angels, gliding swans, and bouquets of dainty flowers but also fancied the same palette, which ran to cerulean blues and cheery pinks.At times, these similarities occasioned grumbling. “Alas and alack! ‘Tis little originality that meets the eye,” complained Gabriel Costa, writing in the pages of the American Hebrew in 1913.

This was no accident. Shana tovas were often barely more than Judaized versions of Christmas, Easter, and St. Valentine’s Day cards. Manufacturers, drawing on “remnants,” were all too happy to recycle last year’s stock for the delectation of Jewish consumers.All it took was the nimble insertion of a Yiddish word here and a Hebrew word there or the addition of a Jewish star, a sefer torah, or the blueand- white Jewish flag to transform a manifestly non-Jewish product (“loving wishes to my sweetheart”) into one suffused with Jewish symbols and meanings.

There were exceptions, to be sure. One popular Jewish New Year’s greeting card, drawing on memories of the transatlantic crossing from the Old World to the New, took the form of a ship’s ticket whose Yiddish text wished recipients a safe journey in the year ahead. Anchors aweigh! Another featured scenes of the Holy Land. All the rage in the years following the Balfour Declaration, these Jewish New Year’s cards made a point of celebrating the modern city of Tel Aviv whose palm trees, sandy beaches, and yawning blue Mediterranean beckoned alluringly while off in the distance a mosque and a sailboat dotted the horizon.

Despite their obvious charm, these overtly Jewish greeting cards were no match for their bedizened and beribboned cousins. Freely mixing their metaphors, often with unintentionally hilarious results, the latter could not help but delight the eye of immigrant Jews and their children.They delight mine as well. One of my favorites depicts a scene that wouldn’t have been out of place on the H.M.S. Pinafore.

Amidst a backdrop of floral garlands and smokestacks adorned by roses, a traditional Jewish family sits on the deck of a sturdy little boat, listening attentively as its paterfamilias makes kiddush. To one side, a natty little cherub, dressed in a sailor suit, appears to be engaged in some sort of nautical activity (rowing, perhaps?). Meanwhile, in the center of the image, there stands a suffragette-like bas zion (daughter of Zion), waving a Jewish flag on which “L’shana tova” is written in small gold lettters.

Another of my favorites takes an Easter basket, festooned with ribbons and lilies of the valley, and, through a fanciful sleight of hand, turns it into a container that houses an old-fashioned scene of a grandfather teaching his grandson the aleph bays as his father and young brother attentively look on.

For all their whimsy, shana tovas were freighted with significance. At once a reflection of and a response to modernity, they spoke to the tug of tradition and the pull of America. For one thing, their popularity attested to a new and wrenching social reality: the physical and spatial dislocations of the Jewish community. Whether as a consequence of immigration to America or of subsequent internal migrations from one part of the country to another, families no longer lived in close proximity, let alone under one roof, as they once had. Greeting cards acknowledged this new reality and, turning to the mail, sought to assuage or soften it by providing a new medium of communication. For another, Jewish greeting cards integrated Rosh Hashanah into the American rhythms of celebration and its conventions of festivity.

Folding Out History
The Kramers are collectors. 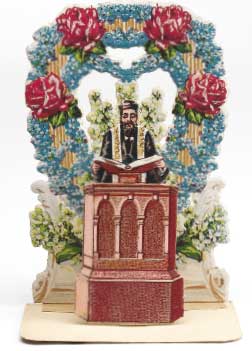 For Harry, retired after thirty years in the hardware business, collecting is a hobby. His passion is hand-carved bears. By now, he has many fine specimens, ranging in size from miniatures to the prized six-foot-high bear that greets visitors at the Kramers’ front door in Fairfield, Pennsylvania. Bernice is a professional collector who displays her wares at a local antiques mall. Since her specialty is old photos and images on paper, the Kramers often go to paper trade shows.

What the Kramers call the “bonanza” of their collecting life happened over twenty years ago at a postcard convention in New York City. “We were on a buying trip for my business,” Bernice recalls. “We’d seen an ad in a hobby magazine for postcards from the Hebrew Publishing Company and were eager to see the collection.” Like its competitors, the Williamsburg Art Company and the Bloch Publishing Company, the Hebrew Publishing Company produced and distributed postcards and elaborate, often fanciful greeting cards called foldouts. These products, sometimes crudely adapted from Christian greeting cards, were aimed at the emerging, fast-assimilating American Jewish market beginning about 1900.

Bernice and Harry Kramer had never seen examples of foldouts. At the postcard convention, they nearly missed seeing the vendor of what is probably the greatest collection of foldouts in existence. And that vendor was, as Bernice says emphatically, “the granddaughter of the founder of the Hebrew Publishing Company! “She was scheduled to fly to California before we could talk to her,” Bernice recalls. “But she changed her plane ticket just so she could meet us. Of course, once we saw it, we ended up buying her entire collection.” The foldouts collection was in mint condition.

It was also beautifully displayed in an album containing dozens of samples of all the Hebrew Publishing Company’s cards commemorating weddings, bar mitzvahs, shana tova, and other significant events of Jewish daily life.

After acquiring their bonanza, the Kramers allowed their extraordinary collection to be put on public display several times. The foldouts have been featured on television, in newspaper articles, and once at the Jewish Community Center at the Ohrkodesh Synagogue in Chevy Chase, Maryland, where the Kramers are long-time members. For that exhibition, a friend in the congregation translated the Yiddish greetings into English. (Bernice speaks no Yiddish and Harry’s is rusty.)

In time, the Kramers, who are now in their early eighties, began to feel that the collection belonged with those who could appreciate the slice of American Jewish life it represents. They contacted the National Yiddish Book Center, where they are members, and received an enthusiastic humbs-up for their gift. Last August the Kramers drove their entire collection (minus two keepsake foldouts) from Pennsylvania to South Amherst. When the box was opened and the foldouts had been, well, folded out, Book Center staff and interns alike were charmed, or “tickled,” as Bernice says – “just as we had hoped they would be.” Another box, this one full of antique postcards depicting Jewish life in America, is on its way from the Kramers.

This year, for Rosh Hashanah, the elaborate shana tova foldouts will be on display at the Book Center. Meanwhile, the Kramers – and several of their sharp-eyed collector friends – are on the lookout for more. They plan to donate any future finds to the Book Center. “We’re so pleased our cards have found such a good home,” Bernice says.