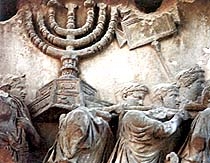 The Jews in Italy have strong bi-cultural roots which go back even before the birth of Christ, when the Jews already had an alliance with the Roman Empire. Under the leadership of Judah Maccabeus, many Israelites left the land of Israel to go to the “Eternal City” (Rome) in the second century BCE. It was not until the Romans destroyed the second temple in Jerusalem [70 CE] that the Jewish/Roman alliance was broken and the Jews were forced into slavery. About ten thousand Jews were transported to Rome to be used as workhands to help build the Coliseum. This image of history was frozen in time and will be remembered forever thanks to the Arch of Titus, where the Roman victory over the Jews was etched in stone. Although enslaved, the Jewish population in Rome flourished. Thirteen synagogues were built as well as numerous cemeteries. However, many Romans despised the Jews and found their rituals to be barbaric. Rome is not the only Italian city where Jewish communities began to grow. Many communities began to spring up in southern Italy as well as a few north of Rome, such as Taranto, Ferrarra, and Milan. 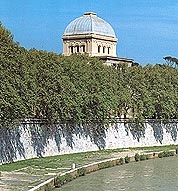 Throughout history the situation of the Jews depended greatly on who was in control of either the Roman Empire or the Church. However, the tolerance for religious freedom started to take a turn for the worse in 380 CE when the Edict of Tessa Lonica of Teodosia was put into act. The edict recognized Christianity as the official religion of the Roman Empire, with very little tolerance for Jews and other religious cults. As the Church gained more power, and as the Empire declined, tolerance continued to swing back and forth. For example, Charlemagne defended the civil and commercial right for Jews, which gave them relative tranquillity for about two centuries. In the south, the Ottoman Empire also let the Jews live peacefully as well. In fact many great schools for Jewish studies opened in Bari and Otranto. After 1000 CE, conditions became more uncertain for the Jews because the feudal system and artisan guilds began to be put into place. Jews were barred from all guilds and were only allowed two positions, that of money lending and the selling of used clothing. It is notable that they were allowed to be moneylenders. At the time the church had forbidden all Christians from money lending and this would not be repealed until the fifteenth century with the passing of Monte Di Piet=E0. However, the position of money lending helped Jews to survive and eventually even to own property. Many feudal lords were kind to their moneylenders and kept them from harm’s way.

In 1215, the Fourth Lateran Council decided that Jews had to live in separate quarters and wear special insignia for the first time in the Italian states. Men were forced to wear red or yellow hats and a cloth badge on their coats. Jewish women had to wear a yellow veil over their hats. These rules were not carried out for very long but they would not be forgotten and they set building blocks for the future.=20 In areas under Aragon rule, Jews generally lived peacefully until 1492, when King Ferdinand and Queen Isabella decided to expel all Jews from the Spanish Kingdom. Many fled to the northern Italian states between the years of 1492 to 1541. Over 37,000 Jews left Sicily, never to return. Most headed for Rome and Milan, but many others settled in Ancona, Venice, and Livorno. The anti-Semitic fervor did not end in Spain. By the second half of the 16th century the church instituted the Papal Bul: All Jews were to be enclosed in ghettos, each community could have only one synagogue, all commercial and civil rights were taken away, and all Jews had to wear a contrassegno (identification). Although similar rules had been instituted in 1215, this was the first time that the laws were regulated. Many Jews decided to flee the Papal State and go to other states where these rules did not exist. In 1516 the first Jewish ghetto was established in Venice and in 1555 a ghetto was established in Rome. Both were overcrowded and dirty, but the study of Torah and Talmud flourished between their closed walls so ironically, rather than destroy Jewish culture, they actually helped it to blossom and grow. However, in 1569 the Church expelled all Jews from the Papal State with the exception of Rome and Ancona. This trend of expulsion continued throughout the Italian states except for Livorno.

It was not until the arrival of Napoleon that the doors of the ghettos were torn down. With the exception of the orthodox Jews, Napoleon was seen as a type of savior. Napolean gave Jews their civil and commercial rights and for once in history they were first-class citizens (except those who lived in the Papal State and Tuscany). However, with Napoleon’s defeat, they were thrown back into the ghettos and once again their rights were taken away.

In 1848, the Italian states were unified as a single Italy under the House of Savoy. The new government freed the Jews and gave them their civil and political equality. They no longer had to conceal their identity and a period of great reconstruction began throughout Italy. By 1922 the process of assimilation was almost complete. Of course, it was at this time that the Fascists came to power. At the beginning many Jews supported them, even participating in the March on Rome. However, in 1929 Mussolini passed the Falco Laws. These laws contradicted article 8 of the Italian constitution that allowed freedom of religion. In 1938 Mussolini produced his Manifesto of Italian Racism and declared the Italians to be part of the “pure race” along with the Aryans. Jews were expelled from all public services, such as the army and also public schools. At this point many Jews decided to leave Italy in hope of finding better lives for themselves.

In 1940 Mussolini joined the war in alliance with Hitler and ordered the fascist army to ransack the ghettos. The confinements and deportations began in 1943. More Jews fled hoping to find shelter in the Alps, convents, and monasteries. Others, such as Franco Cesana, joined the partisans. After World War II, with Mussolini’s defeat and the defeat of the Fascists, Jews were reinstated as first-class citizens. Many survivors left for the newly formed nation of Israel while others decided to stay and reconstruct their communities. Today there are over 40,000 Jews in Rome and Milan alone.