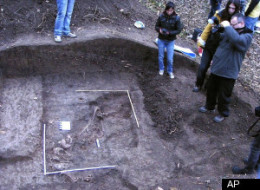 The grave, in a forest near the Romanian town of Popricani, contained the bodies of men, women and children who were shot dead in 1941, the Elie Wiesel National Institute for the Study of the Holocaust in Romania said in a statement.

The find offered evidence of pogroms against Jews in the region, scholars said, campaigns that were long minimised in a country whose official history taught that Germans were the sole perpetrators of the Holocaust.

Sketchy reports about the possibility of a mass grave in the forest began to appear in 2002 and local authorities began an investigation, but it was later suspended after nothing was found.

Experts resumed the investigation at the site and began interviewing witnesses again in 2009, according to Romanian historian Adrian Cioflanca.

Historians have documented several pogroms in Romania during the second World War, including one in June 1941 in the northeastern city of Iasi, where up to 12,000 people are believed to have died as Romanian and German soldiers swept from house to house, killing Jews.

Those who did not die were systematically beaten, put in cattle wagons in stifling heat and taken to a small town, where what happened to them would be concealed. Of the 120 people on the train, just 24 survived.

The country’s role in killing and deporting Jews was minimised by the governments after the collapse of communism in 1989. In 2004, after a dispute with Israel