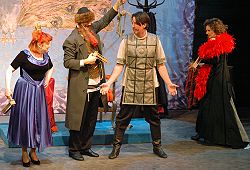 One of the most endearing aspects of Judaism, in my opinion, is the evolution of Jewish traditions over time. Purim Shpiels started out as family, holiday entertainment, turned into professional performances–sometimes so vulgar that they were banned–for a paying public, and have become outreach tools for American Jewish synagogues and communities.

In the 1400’s in Europe, Ashkenazi Jews celebrated Purim with silly monologues. These monologues were generally rhymed paraphrases of the Book of Esther, parodies of holy texts or funny sermons which aimed to entertain audiences. Shpiel is a Yiddish word meaning “play, skit”, and these monologues became known as Purim Shpiels.

By the beginning of the 1500’s it became customary for Purim Shpiels to take place during the festive Purim meal in private homes. Yeshiva students were often recruited as actors, and they would wear masks and costumes.

Over time, Purim Shpiels evolved into more rigid traditions and even competitions:

While the content of early Purim Shpiels was based on contemporary Jewish life and well-known humorous tales, many Purim Shpiels began to incorporate biblical themes in the late 17th century. The Achashverosh Shpiel refers to a Shpiel about the story in the Book of Esther. Over time, Biblical themes expanded, and popular themes included The Selling of Joseph, David and Goliath, The Sacrifice of Isaac, Hannah and Penina, and The Wisdom of Solomon.

Profanity and obscenity–like other traditional Purim Shpiel elements such as prologue, narration, epilogue, parodies and current event stories–remained a part of these biblical-themed Purim Shpiels. The city fathers of Frankfort burned a printed Achashverosh Shpiel because of its vulgarity. And leaders of the Hamburg community banned the performance of all Purim Shpiels in 1728; Special investigating officers fined anyone violating this ban.

Today Purim Shpiels are still performed in many communities and synagogues. Some are brief, rhyming, humorous monologues. Some are puppet shows performed for small children. And some are elaborate parodies of Broadway plays, with scenery, costumes, singing and dancing.

Whatever their format, Purim Shpiels today maintain a Jewish tradition begun hundreds of years ago and, due to their fun nature, are likely to help this Jewish holiday tradition persevere in the future.