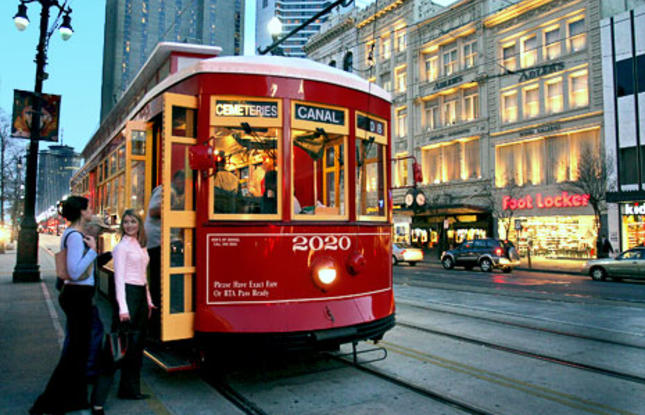 Street Cars And The Flow Of Modern Technology

One of the most charming aspects of New Orleans is the street car. Perhaps it is hard to believe that someone who has written as negatively about modern technology as I have could say something like that.  But as I move along in my discussions on this topic, I am willing to concede that sometimes it may be more useful to look at human history as not so much being sharply divided between traditional natural living environments and modern technological living environments but rather as a gradual transition from one to another.  The street car represents one of those points on the flow from the old to the new.

To say that the street car, particularly the New Orleans streetcar, is part of a transition and has charming elements implies that it has a certain amount of organic stimulation in its presentation.

First, there is the obvious fact that, to a great extent, the New Orleans streetcar, is a mode of transportation that traverses primarily residential neighborhoods with lots of trees and grass  as well as beautiful old homes.  Second, there is the fact that there is a movable grounding provided by the train tracks that hold onto the street car as it travels forward and a bonding as it is attached to a wire running above it that provides  power.  The train tracks and the wires don’t really provide organic stimuli to the street cars,  but they do provide organic modalities of overall direction to the street cars, as the tracks and the wires gently guide the street cars.

The notion of a transition point can be used in many ways with regard to technological development. I had a friend once who said the high point for modern society was the 1950’s when there were only four or five television channels that put out the shows at one time, and so the people watching a show formed a kind of community of interests.

As I look at technology within this model  of ongoing flowing, I see that there is a problem with looking at technological devices as part of a flowing process and that is that it’s hard to determine which transition points are more important than others in terms of long-lasting effects on human society.  There is an overlap between different  transition points and sometimes it is hard to separate them.

At the same time, there is a usefulness  in seeing technology as a part of a flow.  It gives us a different perspective for determining the influences of this transformative phenomenon on our lives.