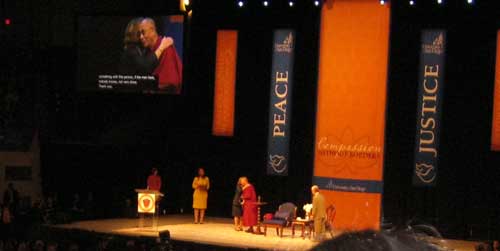 Compassion without Borders. As an ESL teacher who works with students and refugees from all over the world, those words resonated with me. Also, as a Jubu [a Jew and student of Tibetan Buddhism], it was an honor to see HH the 14th Dalai Lama for the 5th time. It was his first time presenting in San Diego, my hometown of almost 30 years.

On Wednesday, April 18th, I went to his presentation sponsored by the Kroc Center for Peace and Justice at the Jenny Craig Pavilion at USD at 1:30. That morning, he had presented at UCSD. Our three main universities, USD, UCSD, and SDSU worked together to bring HH to San Diego on a whirlwind schedule, giving three presentations in two days at all three campuses. I am glad I saw him at USD. The Jenny Craig pavilion is smaller, the campus is the most beautiful, in my opinion, and the event was very well organized.

The program started promptly with a talented Spanish guitarist named Pablo Sainz Villegas. One of the songs he played to honor HH was an old song from Spain at a time when Christians, Jews and Muslims lived in harmony together which I thought was very appropriate. When he finished, HH came on stage to thunderous applause. He changed from as SDSU cap/visor to a USD one. His kindness, humility and sense of humor were very evident. As he sat patiently on stage, there were speeches and introductions given by the president of USD, Dr. Mary E Lyons, who gave him the Medal of Peace, and by Pam Omidyar, co-founder of the Omidyar foundation. The venerable lama Tenzin Dhonden was also recognized as the event chair.

The title of his presentation was “Cultivating Peace and Justice”. His talk was about identifying interreligious harmony, and finding ways for people of all religions [secularists as well] to bring people together to cultivate peace, justice, and compassion for all.

He began by speaking about all the changes that have occurred in the 21st century and how all the achievements in technology could not bring happiness to humans. He felt that the two countries who were making many interesting advancements were India and the United States. However, he also made it clear, that no matter how many discoveries and advancements were made, people would not find ultimate happiness from outside sources. One needs to cultivate peace of mind, for only peace of mind was the ultimate source of happiness.

He also spoke of compassion for yourself and for others, saying one should visualize the person who makes you angry and forgive him/her. He spoke of a Tibetan monk who had been imprisoned by the Chinese for 18 years, and despite being tortured, he still felt compassion towards the Chinese. He spoke of having a healthy mind and body and of training your mind with deliberate thoughts. He spoke of taking physical, verbal and mental action to cultivate inner peace, be it through religious faith, or finding ways to increase positive emotions. He said that a calm and positive mind kept sickness away.

This is just a snapshot of what he said. As always, when I go to see a HH, my mind focuses for awhile and then the sheer light and positive energy of the man take over, and my focus and thoughts begin to blur into a state of calmness and well-being, so it is difficult to articulate all that he said.

For me, as an ESL teacher, I felt that the message he was conveying was that no matter what country, culture, religion, or background you come from, in today’s shrinking world, the most important thing is to cultivate your own peace of mind, and to practice compassion with all even though it would be difficult at times. He confessed that he himself could be impatient at times and lose his temper with his staff, but he said there was an old Tibetan saying that one should bite his/ her own knuckles when one feels anger. He reiterated that you are your own ultimate source of happiness, no matter what your surrounding situation is.

A valuable lesson for all of us to learn, I think.