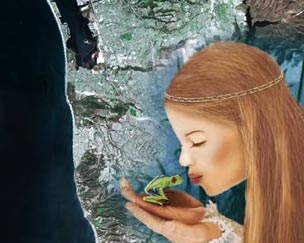 Once upon a time…Not so very long ago…(just a few weeks ago, as a matter of fact…In a land not so far away …lived a beautiful princess, named Sandy…Sandy Ego. Now, Sandy’s life was just about perfect, with one exception…She lived next door to an ugly frog, named TJ.

He was OK for a party every now and then, but he was still an ugly frog with warts, and people told many cruel and negative stories about TJ.

TJ knew that most of these stories were major exaggerations, and many were completely untrue. TJ had always loved Princess Sandy, and he used to spend his time wishing that she would gently kiss him, and he would, magically, turn into a handsome Prince. The problem was poor TJ could never talk Princess Sandy into that magical kiss, but he always thought they would make a lovely couple.

You see, TJ knew, deep inside, he was a real prince. One day, he finally decided to do something about it; looked deep within himself; did a lot of self-analysis; studied; exercised; worked hard, and took responsibility for his own actions, rather than waiting for some magical kiss.

And, ladies and gentleman, I’m here this evening to share what happened next; something miraculous!

As soon as TJ took responsibility for his own future…as soon as he got to know himself…he was amazed with the results. The warts faded away, and he found the handsome, hard-working Prince within. He built himself a castle, and called it Tijuana Innovadora.

Suddenly, TJ was the talk of the town. The eyes of the world turned toward TJ, and they really liked and admired what they saw. Needless to say, this also got Princess Sandy Ego’s attention. She took another look at her neighbor to the south and thought, wow! I’ll bet we could really make sparks fly, if we were to get together.

Well, that’s the story that brought us here, tonight, but this story is far from over. You see, TJ…let’s call him Tijuana and our beautiful princess, Sandy Ego, were truly made for each other. What’s good for one is good for the other, and together, they’re much more than either of the two by themselves. Especially in these difficult economic times, the bond between Tijuana and San Diego is even more important. They complement each other in ways that very few cities in the world could even dream of.

The treasure of opportunities that could propel this region into a new era of prosperity has too often been ignored. Many of Tijuana’s businessmen have ended up dealing with Los Angeles, Shanghai, London or Tokyo, rather than San Diego, just because the beautiful Princess to the north wanted nothing to do with the ugly frog from down south.

Let me, for just a minute, share with you some facts about my beloved Tijuana:

Many of you already know that the Tijuana-San Ysidro border is the most frequently crossed land border in the world.

But did you know… that 3,250 commercial vehicles cross our border each and every day?

And would you ever have imagined that… merchandise with a commercial value of 80 million dollars crosses our border, daily?

Did you know that we have over 52 industrial parks and 588 export manufacturing operations? We’re number one in all of Mexico!

And who works in these industrial parks? Well, let me tell you: With 640,000 skilled workers, we’re easily ahead of the rest of the country, and compete directly with China.

Let me give you a few quick examples:

Just this year alone, Tijuana will produce more than 27 million, state-of-the-art television sets; LED, LCD, PLASMA and 3-D. We even engineer and produce sensors and communication devices used in NASA spacecrafts and missions.

And that’s not all!

Tijuana takes the temperature of the entire world! 85% of the thermometers sold in the US, and throughout the world, are made in Tijuana. We care for your hearts, too! Tijuana manufactures 80% of the world’s pacemakers, as well as the specialized heart valves used in open heart surgeries.

Tijuana even has direct flights to Japan and China!

But Tijuana’s innovation isn’t limited to just to commerce and export! Tijuana is cutting-edge and looking to the future!

Our Valle de las Palmas housing development is the first in Mexico to be recognized as a totally sustainable city, and two of Mexico’s 3 certified sustainable buildings were designed and built by a Tijuana company.

And, by the way, there are far more Tijuana university students studying careers in engineering disciplines than those from San Diego?

If that were the end of the story, it would be pretty impressive, but Tijuana’s innovation is also reflected in other areas, such as our love of the arts and culture. Did you know that Tijuana produces over 50 cultural and art festivals each year, and that the Tijuana Cultural Center, or CECUT, is one of the most important cultural centers in all of northwestern Mexico?

And possibly most importantly, Tijuana has a big heart. We are the city with the largest number of non-profit, charitable organizations in the country accredited by the Mexican Center for Philanthropy.

And I could go on and on…

The fact is, we have much to offer each other. Sandy Ego and TJ need each other. We’ve known Sandy Ego is a princess for some time now, but many people are just starting to understand what a handsome prince Charming TJ is. Together, they make an exceptional couple, and I can only imagine how beautiful the fruit of this blooming relationship will be in the future.

Thank you, sincerely, for this wonderful recognition.

I, of course, am not the prince, only one of his humble servants, but in the name of our wonderful prince TJ (Prince Tijuana), I thank you from the bottom of my heart. This could truly be a love-affair for the ages, but as we all know, the best relationships are forged by a desire and willingness to constantly work to make things better. Princess San Diego, my Prince, TJ (or as he’s known today, Tijuana Innovadora) invites you to join him in a relationship to be envied around the world, homegrown, right here on this Intelligent Frontier.