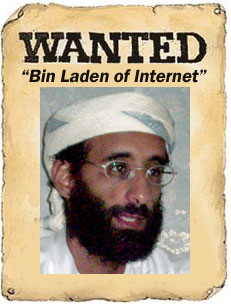 As a student at Colorado State, Yusuf Siddiqui remembered fellow student Anwar al-Awlaki as someone concerned mostly about the “simple-minded clichés” that characterized the way Muslims were depicted in American television and movies. He didn’t express extremist views, and his criticisms of the United States were fairly benign, said Siddiqui, also a Muslim.

Al-Awlaki’s political activism amounted to the wearing of a T-shirt that supported the plight of Muslims in Eritrea and sporting traditional Afghan clothing.

“We hardly ever talked about politics,” Siddiqui said of their time together in the early 1990s. “Anwar was more concerned about correcting negative images of Muslims.”

Al-Awlaki, 39, who is a U.S. citizen, has clearly gone beyond mild criticism of his country, according to the Obama administration, which in naming him a global terrorist has made him a target for assassination by U.S. forces or CIA drones. The designation was a recognition that al-Awlaki has risen in the ranks of anti-Western Islamic extremism and become a mortal enemy, a danger to America’s national security on a par with 9/11 mastermind Osama bin Laden.

Although both seek the same aim of a world ruled by Islamic law brought about violently if needed, the two take quite different approaches. While bin Laden keeps a low profile, al-Awlaki has hundreds of sermons on the Internet. Bin Laden’s past statements issue threats and orders to Muslims to kill; al-Awlaki’s sermons explain to potential followers why the West is evil and are pocked with references to pop culture given in disarming American English.

In one sermon that has been viewed more than 40,000 times on YouTube, al-Awlaki uses an anecdote about the late pop star Michael Jackson to make a point about the inevitability of death and to suggest jihadists should not fear dying for their faith. In another lecture, he makes the case that the U.S. military’s efforts in Bosnia and Kuwait in the 1990s were made under the false pretext of human rights, and the only just war is one fought for Islam. And how to justify the killing of American civilians?

“The American people in their entirety take part in the war, because they’ve elected this administration and finance this war,” al-Awlaki said, alluding to Afghanistan and Iraq wars, in an al-Qaeda video posted recently online.

Evidence is mounting that al-Awlaki is perhaps the most dangerous enemy of the U.S. because of his ability to recruit followers and inspire attacks through e-mails and websites, the CIA says. The Arabic satellite network Al Arabiya has dubbed him the “bin Laden of the Internet.”

Al-Awlaki’s life began not in a Muslim enclave but in Las Cruces, N.M., a desert town not far from the Mexico border and the White Sands Missile Range. His father had gone there in 1971 from Yemen with his wife to earn a master’s degree in agricultural economics at New Mexico State University. The family lived and worked in the United States until returning to Yemen in 1978, when al-Awlaki was 7. Al-Awlaki lived in Yemen for the next 11 years, during which time his father served as agriculture minister and as president of Sana University, and returned to the United States in 1991.

Terrorism experts say al-Awlaki’s fluency in English, credentials as a cleric and his intimate familiarity with American culture have allowed him to successfully recruit followers in the USA — something bin Laden has had little success doing.

The FBI has been keeping an eye on al-Awlaki for years, but he didn’t become a priority until authorities connected him to Nidal Hassan, the Muslim U.S. Army officer charged with killing 13 people in November at Fort Hood in Texas. Hassan e-mailed al-Awlaki for advice several times before the attack, and al-Awlaki has praised him and called on other Muslim soldiers in the military to carry out similar attacks. The FBI has since alleged that al-Awlaki is connected to several terrorist plots:

The Obama administration has not said whether something happened recently to prompt it in April to name al-Awlaki a specially designated global terrorist. Leon Panetta, the director of the CIA, said it was a culmination of things.

“Mr. Awlaki is a terrorist who’s declared war on the United States,” Panetta said in a television interview in June. “He’s trying to encourage others to attack this country.”

When he returned to the U.S., al-Awlaki studied first at Colorado State University in Fort Collins, and then spent the next 10 years in Denver, San Diego and the Northern Virginia suburbs of Washington before leaving in 2002 for London, where he preached at mosques known for radical ideologies.

Al-Awlaki returned to Yemen in 2004 and was arrested there on kidnapping charges. He was released in 2007 after 18 months in jail. Yemen’s Foreign Ministry believes he is hiding out in his father’s ancestral region with a wife and children.

Al-Awlaki’s father, Nasser, has pleaded with the government not to target his son. He has allowed the American Civil Liberties Union to file a lawsuit alleging that as a U.S. citizen, al-Awlaki has the right to a trial and killing him would be illegal.

“The power that the administration is claiming is essentially the power to effectively invoke the death penalty without charge, without trial,” ACLU Deputy Director Jameel Jaffer said.

Grenier counters that al-Awlaki gets no special shield while waging war against America abroad. In the U.S., his actions would warrant trial with constitutional protections, but overseas he is a military enemy like any other, subject to attack.

“Awlaki is outside U.S. jurisdiction and so beyond the reach of U.S. law,” he said. “If you are not subject to U.S. law, you lose the protections of U.S. law.”

Although terrorism analysts say that al-Awlaki may not have the capability to carry out a major attack on U.S. soil as bin Laden orchestrated with the 9/11 attacks, he might be a greater danger.

“Osama bin Laden thought big and acted big,” said Bruce Hoffman, a counterterrorism expert at Georgetown University. Hoffman ticked off a number of al-Qaeda attacks under bin Laden, such as the 1998 bombing of the U.S. embassies in Tanzania and Kenya that killed 223 people, the suicide boat bombing of the USS Cole in 2000 that killed 17 sailors and the 9/11 attacks, in which nearly 3,000 people died.

“That’s not Awlaki’s style,” Hoffman says. “It may be in part a reflection that he doesn’t have the capabilities or skill sets to put together the spectacular. But I think he’s also pursuing a deliberate strategy of death by a thousand cuts.”

Grenier said al-Awlaki plays the role of al-Qaeda’s recruiter and motivator, calling him a “small-caliber bin Laden.” “His primary value to the organization and to the movement is inspiring others to take up jihad and providing them with the religious justifications that many of them seek before engaging in terrorist activity,” he said.

Steven Emerson, executive director of the Investigative Project on Terrorism (IPT), said that al-Awlaki likely was exposed to radical ideology as a youth in Yemen, where firebrand anti-American ideology was common in the mosques.

The FBI investigated al-Awlaki in 1999 and 2000 after learning that he may have been contacted by a possible procurement agent for bin Laden, according to the 9/11 Commission Report. During that investigation, the FBI learned that al-Awlaki knew individuals from a charitable organization called the Holy Land Foundation that a Dallas jury ruled in 2008 was fundraising for Hamas, the U.S.-designated terrorist organization that controls Gaza.

The FBI later learned that he preached to two of the 9/11 hijackers — Nawaf al-Hazmi and Khalid al-Mihdhar — at the Rabat Mosque in San Diego, according to the 9/11 Commission Report. One witness who was not identified in the report recalled seeing al-Hazmi and al-Mihdhar stay in a guest room on the second floor of al-Awlaki’s San Diego mosque, the report said.

The hijackers expressed respect for al-Awlaki as a religious figure and may have been close to him, the report said. Al-Hazmi later appeared at the Dar Al-Hijrah Islamic Center mosque in Falls Church, Va., where al-Awlaki served as the chief cleric in 2001, according to the 9/11 panel report.

In the immediate aftermath of the 9/11 attacks, al-Awlaki was regularly quoted in the U.S. press condemning the attacks, but also said that he believed they were motivated by U.S. actions.

“Our hearts bleed for the attacks that targeted the World Trade Center as well as other institutions in the United States, despite our strong opposition to the American biased policy toward Israel,” al-Awlaki told members of Dar Al-Hijrah days after the attacks, according to newspaper reports.

Emerson suspects al-Awlaki was faking his dismay and may have been involved in the attacks.

One of his neighbors at his dorm at Colorado State, Bounat Sengdara, said al-Awlaki was a soft-spoken, average student who loved to play table tennis. Though Sengdara is not Muslim, al-Awlaki would sometimes invite him to Muslim Students Association events on campus, he said.

Sengdara recalled having a conversation with al-Awlaki about a Denver Nuggets basketball player named Mahmoud Abdul-Rauf (formerly known as Chris Jackson), who had converted to Islam.

“I was telling him that I couldn’t understand why someone would leave their religion,” Sengdara said. “He just laughed and told me that the thing about Islam is that it is a complete religion. Believers who accept it follow it in every part of their lives.”

Siddiqui recalled that al-Awlaki would often mention in conversations that he spent a summer during his college years training with the Afghan mujahedin, Muslim fighters who battled the Soviet Union’s occupation in Afghanistan.

“I think his time in Afghanistan was something he was really proud of,” said Siddiqui, who was involved with al-Awlaki in Colorado State’s Muslim Students Association.

Years before he was placed on the U.S. terror list, al-Awlaki was regarded as a knowledgeable Islamic scholar. CDs of his sermons on the prophet Mohammed and other topics were big sellers in Muslim bookstores in the USA, Emerson said.

Just miles from the Dar al-Hijrah mosque in Falls Church, the owner of a Muslim grocery store and book stall said he did brisk sales of the al-Awlaki CDs until he took them off the shelves in June when someone pointed out that they were offensive.

“From a purely Islamic point of view, they were excellent,” said Mohammed Abdul Mateen Chida, owner of Halalco, who has sold hundreds of copies of al-Awlaki sermons. “There was no tinge of terrorism or anything like that at all in there.”

Emerson said hidden in those sermons delivered pre-9/11 are signs that al-Awlaki was edging toward radicalism. An IPT review of his sermons shows there are rants against Israel and calls for persistence in a commitment to jihad, or holy war.

Through his sermons, al-Awlaki comes off as charismatic, but not bombastic, Emerson said. He can relate to disaffected American Muslims in their own language, and that may be what makes him so effective, he said.

“He’s not the ranting lunatic that bin Laden comes off as,” Emerson said. “But his message remains just as dangerous.”