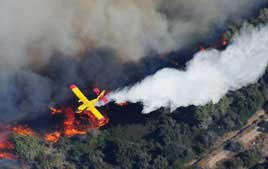 Current situation of assistance from abroad in the Carmel forest fire

Israeli diplomatic missions in capitals around the world are continuing in their efforts to accelerate international assistance to enable the country to cope with the disaster. The Ministry of Foreign Affairs has established a situations room with representatives from the Israel Air Force, the National Emergency Authority, the firefighting services and other agencies.

Following is the current situation according to the data received in the MFA’s situation room:

Twenty one aircraft and helicopters have arrived in Israel. Of these, 13 are actively engaged in extinguishing the blaze.

An additional thirteen planes are expected to land in Israel today, Saturday 4 December 2010:

Tomorrow, Sunday 5 December, an additional 3 planes from the US and one from Canada are expected to arrive.

I have spoken with approximately 30 heads of state and government, presidents and prime ministers, in the past three days. I must tell you that their mobilization, the warmth of their remarks, their willingness, the desire to help immediately, sometimes even before we have managed to request it, must warm the heart of all Israelis. There is very great solidarity here and there is very great cooperation, of course in keeping with their abilities. People are bringing what they have. Governments are bringing what they have, as per the distances which are often considerable; but not even this is deterring people.

Over the past day, this effort has led to our being equipped with an aerial force of ten planes – four from Greece, two from Turkey, one from Cyprus and one from Russia. These aircraft have started to operate. They are in addition to our planes, you saw them, the sprayers that are doing exceptional work, but of course we need the massive force and this has happened. We have also received three British planes, one from Cyprus. These are the forces that we have succeeded in bringing immediately from not very far away. In the coming day, I expect that we will double this force with firefighting aircraft from France and Spain. There have been weather and other problems but as you see, we are overcoming them, and they will be welcomed. Also, the force of helicopters is being doubled and even tripled.

We have also witnessed displays of admiration and assistance from Egypt, from Egyptian President Hosni Mubarak, from Jordanian King Abdullah, and from Palestinian Authority Chairman Abu Mazen, who volunteered to send three firefighters. I think that these things are very important. I had a very good and warm talk with him. I expressed appreciation both for this step and for his solidarity in conveying his condolences, as others have also done, and I told him that we’re in the same neighborhood. The fire is once here and once there. We are, in effect, creating a regional network, after we purchase the planes, the planes will join a regional network that I believe we can establish here for the benefit of all of our peoples.