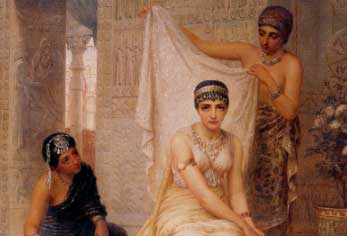 Purim is one of the more obscure Jewish holidays. Celebrated around March, it commemorates the deliverance of the Jews from a genocidal plot, as recorded in the biblical Book of Esther (Megilla). The Megilla begins with a party thrown by the Persian king Ahasuerus, the public disobedience of his wife Vashti, and her subsequent banishment. Soon regretting his decision, Ahasuerus searched the kingdom for a new wife and chose Esther, a Jewish woman. Because the prime minister, Haman, was severely anti-Semitic, Esther's uncle Mordecai advised her to conceal her Jewish identity from Ahasuerus. During Esther's reign as queen, Haman began plotting to wipe out the Jewish nation. Esther finally told Ahasuerus that she was a Jew and then informed him of Haman's plot to destroy her people; Ahasuerus then killed Haman, sparing the Jews.

Purim was always a time of celebration and joyousness for me as a child. Even when I was younger and not a full-fledged feminist, I appreciated that Purim had a strong female protagonist, Esther. Once I discovered feminism, I, among many other Jewish feminists, adored the fact that such a righteous woman was the main character. However, it bothered me that the Megilla starts off with Vashti, the first antagonist of the Purim story. I'm far from the only one disturbed by this understanding, as Jewish feminists have reexamined Vashti and her role in the Purim story.

The Megilla itself discusses Vashti very neutrally. After describing Ahasuerus' party at length, the text simply says that Vashti made a feast for the women of Persia, too. When Ahasuerus was drunk, he called for her to come "with the royal crown to show off [her beauty] to the people and to the officials" (Esther 1:11). She refused, motive unknown. Furious, he consulted his advisors, who suggested punishing her in order to discourage common women from rebelling against their husbands, too. Ahasuerus banished her.

Vashti is attacked by commentators on the Megilla. The Talmud explains that she was the great-granddaughter of Nebuchadnezzar, a Babylonian king who conquered most of the known world and exiled the Jews from Israel for 70 years. (The Purim story takes places during that exile.) Nebuchadnezzar's grandson, Belshazzar, was king while the Persians destroyed Babylon. When the Persians ransacked the castle, they found Belshazzar's toddler daughter, Vashti. Cyrus, the king of Persia at the time, decided to marry her to his son Ahasuerus. Since the understated Persian monarchy needed credibility, Vashti, from the prestigious line of Nebuchadnezzar, certainly gave Ahasuerus pedigree.

Another commentary says that the party Vashti made was completely equal to Ahasuerus', with the same kind of food and decorations. The Talmud says that it was adjacent to the men's party, close enough for the male partygoers to hear the women's voices. As a result, the drunken men began discussing the beauty of their countries' women. Ahasuerus wanted to prove that his wife was the most attractive of them all, so he commanded Vashti to come to his party and dance, wearing only a crown. The Talmud explains that she refused to come, not because she had an objection to dancing in the nude but because she developed a skin ailment.

These commentaries were mostly written by men circa 400 CE, a time period not known for its feminist inclinations. It is therefore understandable that the content of their commentaries isn't terribly pro-woman. However, as Jewish feminists Phyllis Chesler and Rivka Haut have written, "It is not enough to hold by previous commentators, learned as they are, but to bring our era's sensibilities, which includes feminist knowledge, to bear on the text."

My bearing on the text is that Vashti is a woman we must emulate. While her lineage has been traditionally held against her, I find this unfair. The Bible is filled with positive characters that come from bad families; Abraham's father Terah was considered evil, but commentators never put Abraham down because of his ancestry. Why revile Vashti?

Vashti understood feminism thousands of years before it was given a name. Realizing the sexism of the fact that Ahasuerus made a party for only the men of Persia, she decided to level the playing field and make an equal party for the women.

Vashti was an extremely proud, headstrong woman; there was no way that she would debase herself by dancing for Ahasuerus' drunken friends. She didn't refuse because she suddenly developed a skin ailment, but because she was a self-respecting woman. The Talmud is right in the sense that Vashti did not want to jump when Ahasuerus snapped. Why would she knuckle under to his commands? Unfortunately, like some husbands today, Ahasuerus couldn't deal with the thought of a wife stronger than him, banishing Vashti and passing a law enforcing women's subservience.

There are still many Vashtis today, women who are punished because they say no, women who are stuck in abusive relationships. It is imperative that we learn from the Megilla and work to change the culture we live in today. Bash rape myths when you hear them. Support friends who are survivors of rape and domestic violence. Patronize charities and organizations that help women escape situations of domestic abuse and get through the aftermath of a rape. Ensure that women have courage to say no like Vashti did, but make certain that they will not suffer her end.

There is a Jewish teaching that your name reveals the essence of your soul. In Persian, the name Vashti means goodness. A commentary explains that Vashti comes from the Hebrew word shtei, meaning two. While the commentary uses this to explain Vashti's "twoness" in a negative light, it can also be seen positively. Esther is considered the only hero of the Purim story; Vashti can be counted as the second.

*Yiddish for a Purim skit or play.

Trump’s Use Of Prejudice To Tie People To Him